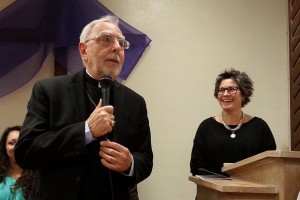 Over 250 leaders of Pima County Interfaith Council (PCIC) convened at St. Phillips in the Hills to celebrate 25 years of success. Since 1980, PCIC has leveraged upwards of $100 million in state and local funds into projects that benefit the common good including KidCo, JobPath, local parks and recreation centers across the County.

The event not only celebrated PCIC, but also raised $20,000 for the organization.